2010.08.27. Corner detection using real images with and without Gabor Filters

As we're able to see on the last work, I'm using Gabor filters to detect borders in a specific orientation combination, and with a single scale. That way, when I use FAST algorithm to detect corners, I only get the corners under these specifications. The only reason to use FAST to detect corners is because is quite precise to do that. We can see this example:

My main propose is to show the difference between:

- Use FAST over Gabor filtered image.

- Use FAST over original image.

On this experiment, we're using a real Firewire camera to get the images in real time. The results are the followings:

The main difference between using or not Gabor Filters is awesome: c-example has only desirable corners, but d-example has too much noise.

As I've described on last entry, I'm using Gabor filters in order to detect borders. But I've realized I can not use the forty solutions for use that as a real-time solution. So, I've consider just a single scale (so we could say: the robot has myopia) and a pair of orientations in order to detect some corners and then we will able to detect basic shapes.

Here we have the original image: 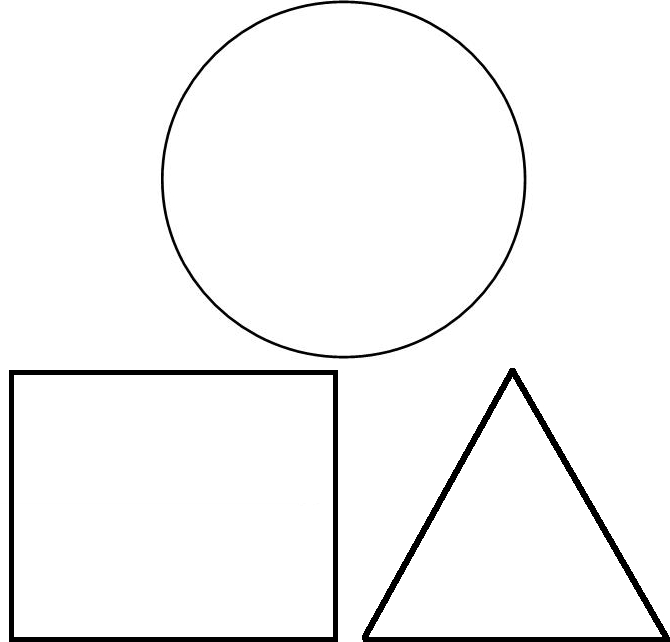 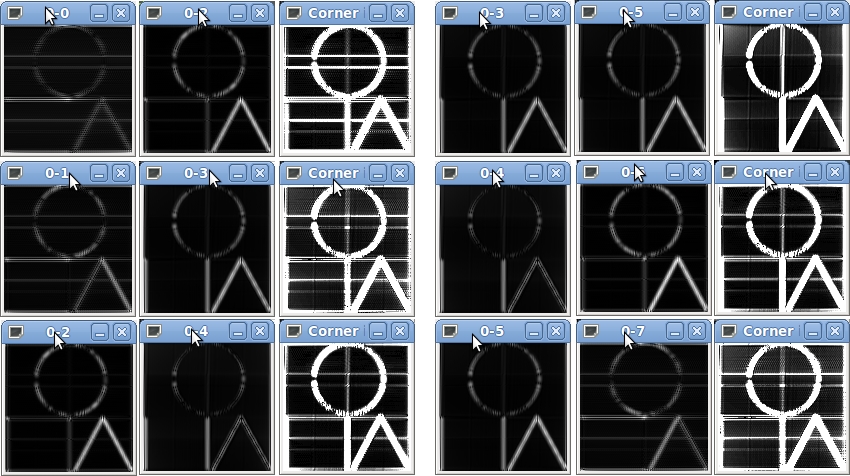 I've implemented a Gabor filters system which I'm going to use to detect basic shapes (squares, triangles, circles). In image processing, a Gabor filter is a linear filter typically used for edge detection. Frequency and orientation representations of Gabor filter are similar to those of human visual system, and it has been found to be particularly appropriate for texture representation and discrimination. In the spatial domain, a 2D Gabor filter is a Gaussian kernel function modulated by a sinusoidal plane wave. (Text extracted from Wikipedia.)

(Maybe you've to zoom in the image)

So, I get forty filters like this one, but in different orientations and scales: 5 scales x 8 orientations (each of them). That way, I can get different border detection results.

We can get these results using just one scale and different orientations. We can appreciate the differences. (The first picture is the original image.)

In order to do a faster attention system algorithm, we're gonna work with log-polar images. At first, we have a covert attention system guided through the movement. That way, we're simulating the human eye mechanism: retina and fovea, and the basic human eye behavior: we pay attention where we see movement. 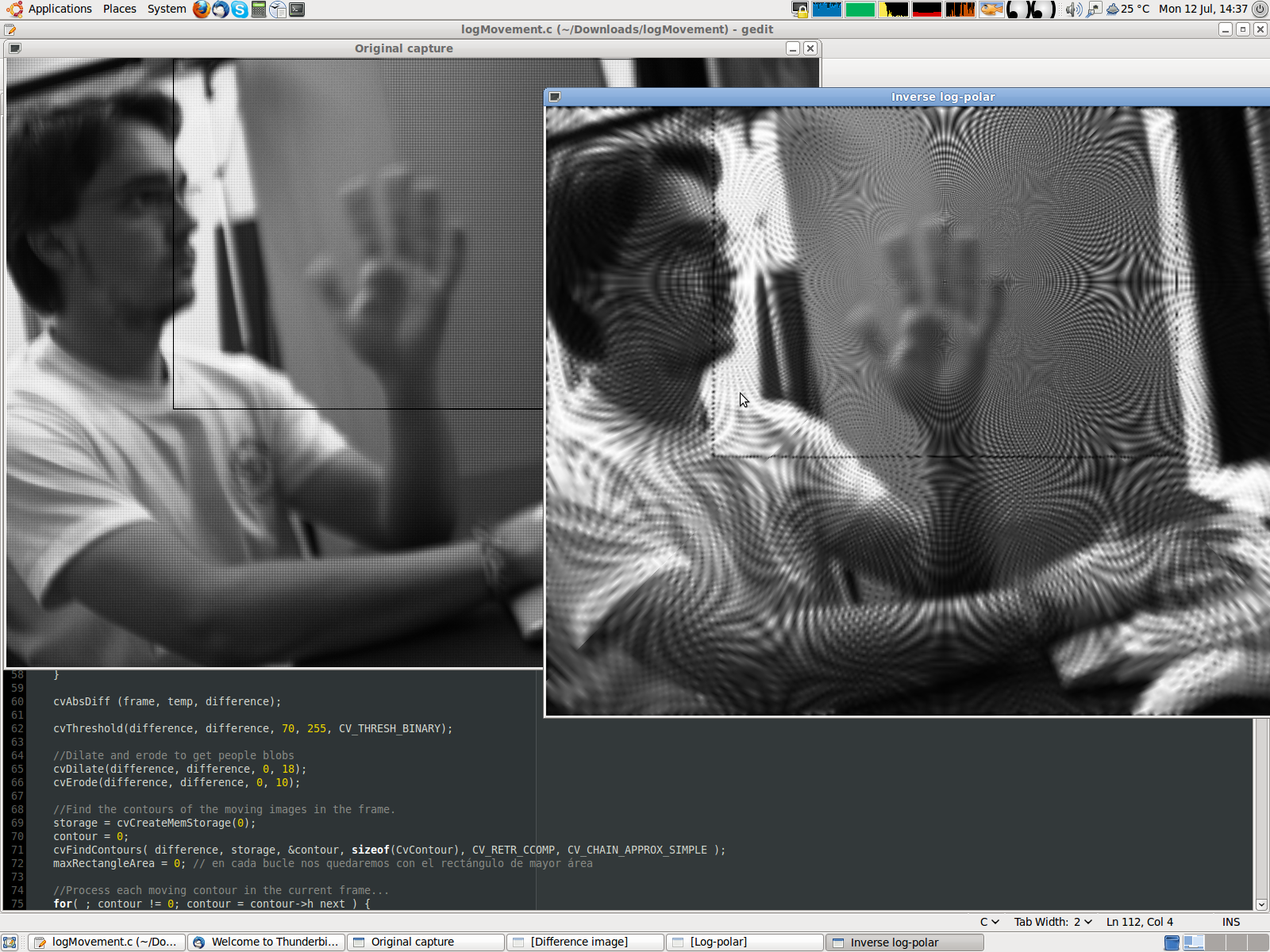 Now, we've a new GUI more useful and easy to see whatever you want to get. Here, I show a screenshot. 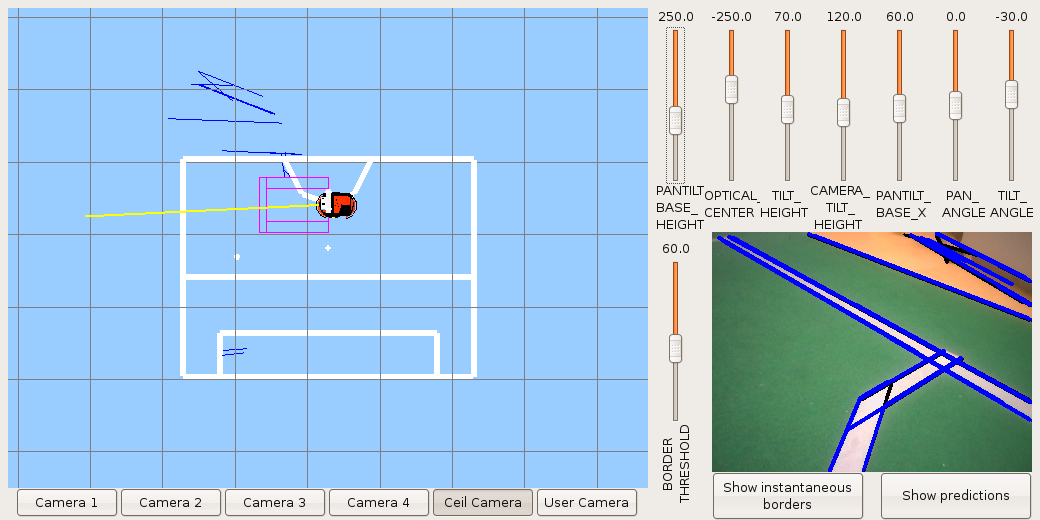 On this video, we show the Pioneer behavior with our attention system. It has to follow arrows located above Robocup football field, with a movement similar to famous Ping-Pong game.

2010.03.23. Space recognition with a spiral movement, with a big threshold

Here, we do the same experiment as the previous one, but now we want to produce continuous lines. So we've had to increase the parallelism threshold in order to fusion themselves. But the main problem is the noise we get in this case.

On this video we see the robot spiral movement through the Robocup football court. How we can expect, it has odometry errors in its estimations. Anyway, the memory is coherent around the robot, correcting previous and erroneous estimations.

Security Window has been incorporated to the robot. We can see the 3D representation. 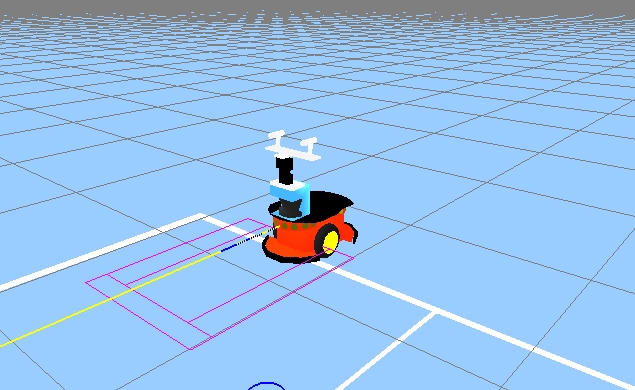 Now we can see how robot 3D memory is consistent with the real environment.

Here we can see representation inside robot 3D-memory, while it has been moving a few minutes. It an amazing image because odometry errors aren't significant. Segments estimation and real segments fit properly. 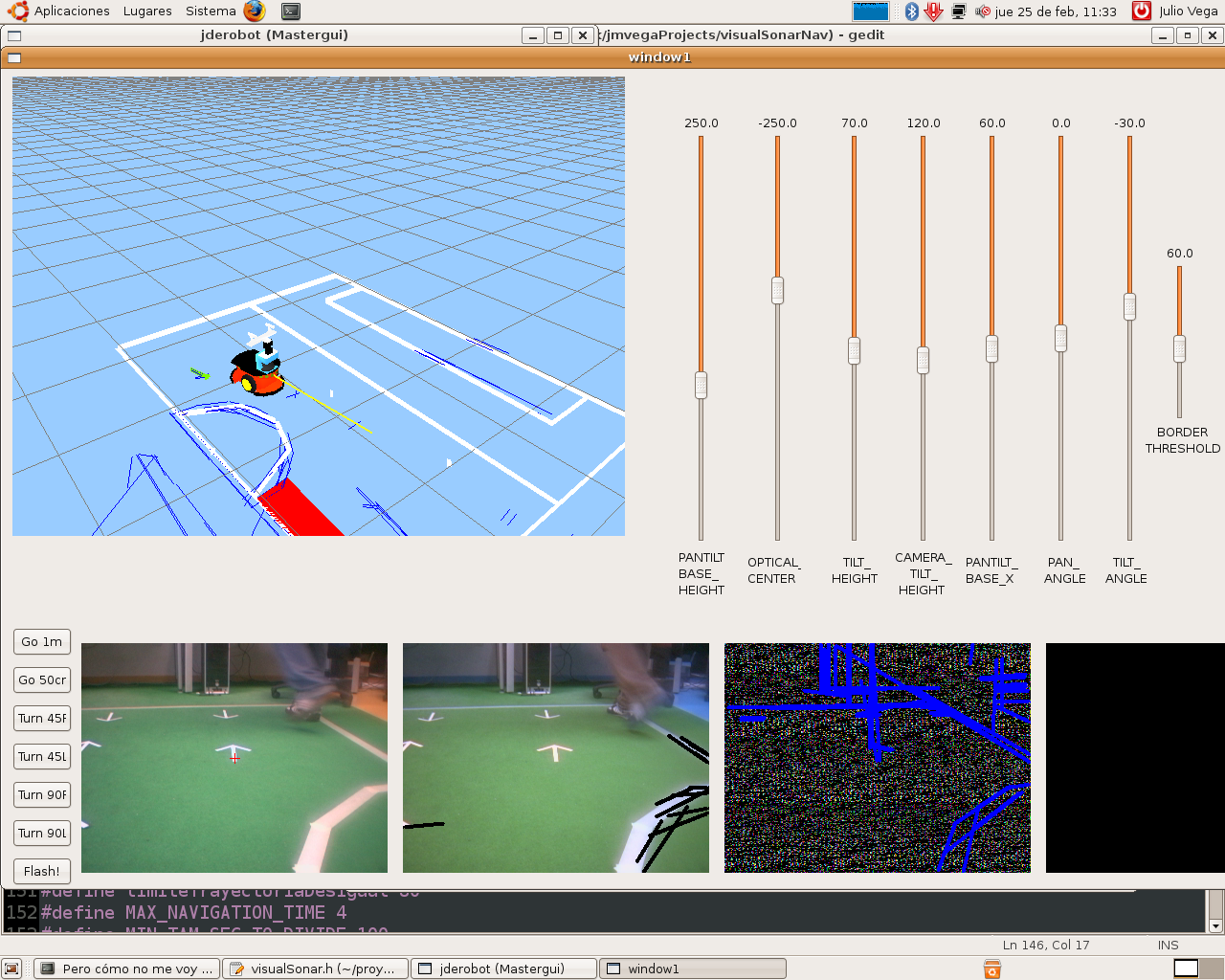 In these videos we can see how our robot go around lab avoiding obstacles, following arrows and detecting faces. The attention system is well build, so robot only pay attention those things it considers important for its navigation. While robot is moving, it goes recovering information around environment and doing its memory.

In the first video, we see Pioneer robot from a exterior camera. In the second one, we see the robot memory, from the on board camera.

In this video, our algorithm is detecting all objects around robot. Now, arrows let robot knows where is the goal. When there are many arrows around the robot, only the nearest arrow is the main influence over robot navigation.

Now, algorithm's able to detect faces, parallelograms and arrows, with too much noise. That way, our robot will able to navigate following these landmarks. 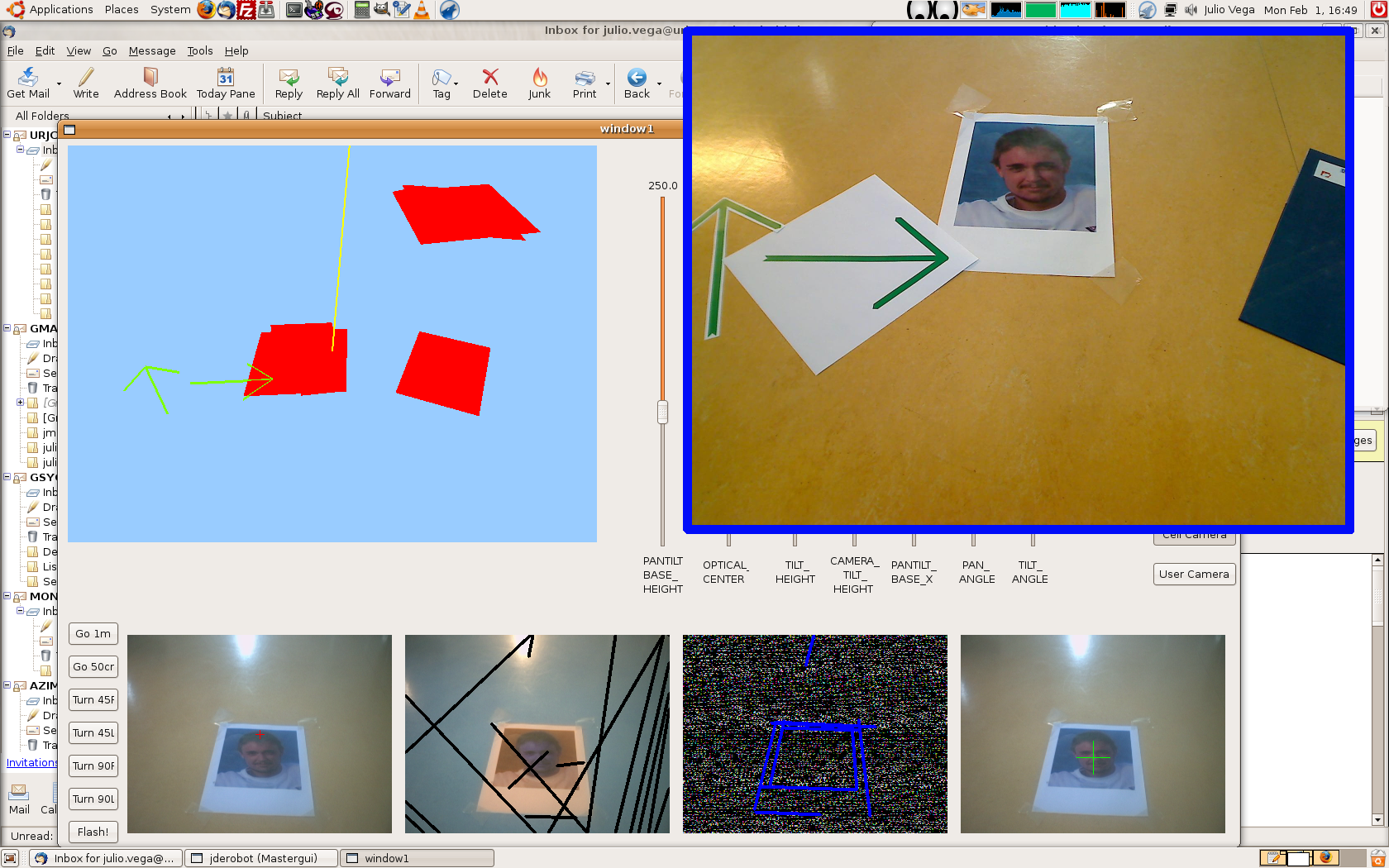